If you have the prevledge of being one of the many folk who like and have access to venison, and are looking for a new way to prepare it….this is for you. I take a nice piece of hindquarter, 4 inches thick at the most. My choice is to marinade for three days up to five. However, 36 hours is the least amount that will still give that amazing flavor.

The first time I made this, several years ago, I actually had to show John the bag I had removed the meat from to prove it was venison and not beef. I still believe in the back of his mind he feels I was pulling his leg. It was that good if not better…..than that good!

Put your roast in the container one by one add all ingredients. You can not really stir it so I seal it up and shake. You will need to mix or shake it up a few times a day until you are ready to eat. Before cooking I would let the meat warm up a few hours first by leaving it in the container on the counter at room temperature. 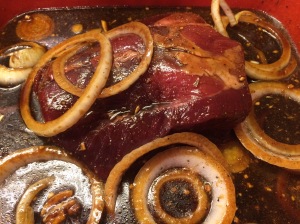 I sometimes also add some dried garlic hunks and dried onions if I have them, this seems to intensify the flavors.

To cook, my method of choice always is open flame bbq or coals. You can broil this in the oven too. Do not forget to grill your onions. Serve medium rare just like beef. You can make a horseradish dip with sour cream and some au ju if need be, I take the left over marinade and heat it up and use that for a dip too. After the meat is cooked to medium rare let rest a few minutes and slice very thin. Your guest or family will be thrilled with the flavors of the venison.

The kicker…..if you do not have venison or refuse to eat it….do the same with beef…..it will rock too!

As always we hope you enjoy.